What can we make together? 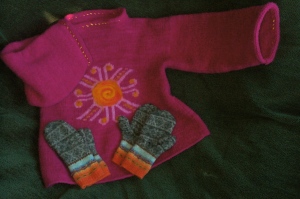 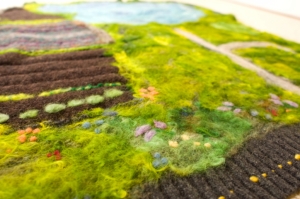 How about making yarn? In a 90-minute session, I can teach you how to form hand-crafted yarn from loose wool, using a hand-spindle. I’ve written about teaching children to spin in How to Host Your Own Yarn Party, printed in Interweave Press Spin-Off magazine, Summer 2007. I spin my own custom yarn on a portable Majacraft wheel, which I’m happy to demonstrate.

Would you like to learn the basics of paper-making? How about Pysanky/Ukrainian egg-dying? We can stitch my supply of upcycle-able shrunken sweaters into treasure bags, totes, hats, scarves and mittens—no special sewing skills are required. On my small heddle loom, we can make fabric from yarn—we can complete a handwoven scarf in an hour, in whatever colors you choose.

Folded paper window stars are a lovely Advent season project, for ages 4 and up.

For other children’s party ideas, my daughter assembles Flower Fairy kits ($3 plus shipping) and hosts Flower Fairy parties for children. She sells greeting cards with pressed flower accents ($2 per card, $10 for a pack of six cards with envelopes).

Taught yarn-making and star-folding workshops for religious educators at Weaving Our Gifts conference, 2010.

Served as contributing editor for the first two editions of Living Crafts magazine, Winter 2008. Pulled together crafters’ stories for It Takes a Village to Knit a Farm, one of the most popular articles in the magazine’s history.

Taught four back-to-back fiber arts crafting sessions for campers in Rockport’s Art Harbor summer program. Tailored sessions for ages 4 to 16. Summer 2008. In this video, while board members describe Art Harbor, look for kids working with wet stuff in tubs, using a rolling pin and sponge, and uncovering handmade paper. I’m the figure in the bright blue apron, extending an arm toward the industrious art-makers.